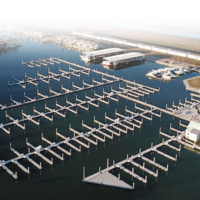 The best memories on the lake begin with a great experience. That’s why we ma... Read More

The closest facilities to the inlet are way upstream near and round Morgan City, which makes the city popular with cruising boater arriving from offshore and also from the east or west via the GIWW.

The Lower Atchafalayas exit into the Gulf of Mexico forms a delta area, and delta areas are a settlement area for sediments, making shoals and shallow areas problematic at points. That said, depths outside the main marked channel are four to six feet, but we dont recommend you test them.

The main ship channel has a long line of buoys that start about 23 miles southwest of the entrance, but you dont have to follow the entire channel is you raw less than five feet. We do, however, recommend that you pick up flashing red 26 west of Point au Fer and follow that the rest of the way in, paying close attention to all the marks as you go.

Write a Review
No reviews yet! Be the first to write a review of Lower Atchafalaya River Inlet.