The 2021 Marinas.com Boaters’ Choice Awards Recipients Are Here! See This Year’s Marina Honorees
Clear throughout the day.
68℉WNW at 15 knots 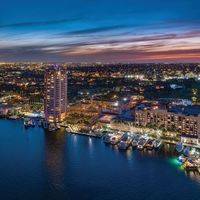 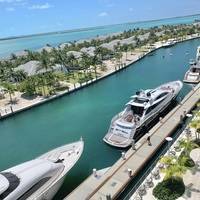 The Grand Lucayan Waterway is a north/south passage that allows boater to travel from Dover Sound, which is on the north side of Grand Bahama, to the Northwest Providence Channel on the southern side of the island. There are a few considerations you must take into account before transiting the area, however.

First, the Casuarina Bridge crosses the waterway with a 27-foot fixed vertical clearance, limiting the passage mainly to power vessels. Second, although the actual Lucayan Waterway has depths of eight to ten feet, the approach channel to the northern end in Dover Sound only has four-foot depths, limiting the passage to shoal-draft boats. Lastly, take into account the current (up to four to six knots), and time your passage with the tides accordingly.

As you can see from the image above, a series of red and green daybeacons mark the entrance channel to the Luyacan Waterway. To approach the entry channel start out by intercepting waypoint 26 37.044N 78 38.813W about a half-mile northwest of the inlet, and then set a course of 132 degrees true to meet the opening. Once you have found the approach channel (lined with red and green marks), you can follow them in and proceed down the waterway itself, keeping the aforementioned warnings in mind.

The waterway is about eight miles long, and local authorities ask that boats transiting the area maintain a speed of at least five knots. If you time the tides correctly and mind your draft and overhead clearance, the passage should be fairly easy and uneventful. youll be saving more than 20 miles buy cutting through Grand Bahama - if youre able.

Write a Review
No reviews yet! Be the first to write a review of Grand Lucayan Waterway North Inlet.