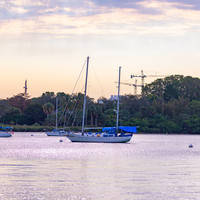 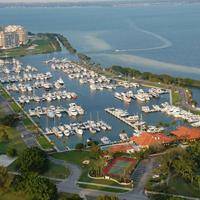 47 Reviews
Dock your boat in our full-service 291-slip, deep-water marina and spend a fe... Read More 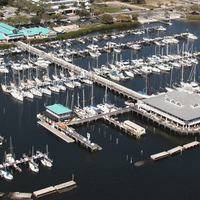 The primary limiting factor for the passage between the Manatee River and Terra Ceia Bay is the 13-foot fixed vertical clearance bridge, pictured above, that crosses the cut and carries traffic from the mainland to/from Snead Island to the west (left). Depths in the cut range from about four to five feet, which is acceptable for most boats that can deal with the limiting overhead clearance factor of 13 feet.

We will discuss the approach from the south via the Manatee River, as shown above. Having cleared the entrance to the Manatee River, set a course for flashing red 14, which marks the shoal off McNeil Point, and then turn north toward red daybeacon 2 at the beginning of the dredged channel toward Terra Ceia Bay.

Once you have cleared the red daybeacon, a series of uncharted private aids to navigation (visible above) serve to mark the shallow edges of the channel and help guide you in. After you have entered the cut and cleared the bridge, you will enter Terra Ceia Bay and head toward red daybeacon 4, which marks the northern terminus of the cut. Depths deepen quickly to eight- and nine-foot depths past red daybeacon 4.

There are several marinas located on the southern portion of Terra Ceia Bay, and many of them can be seen above on either side of the channel. The ones to the right (east) have a tricky entrance channel, but plenty of sailboats and deeper-draft-type boats seem to be able to make their way into the basin where the facilities are located. Outside the cut to the southwest (out of the image to the left) is a special anchorage with four- to nine-foot depths.

Write a Review
No reviews yet! Be the first to write a review of Manatee River Terra Ceia Bay Inlet.