Partly cloudy throughout the day.
68℉WSW at 5 knots 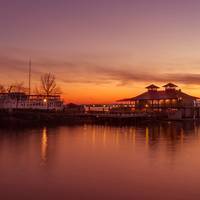 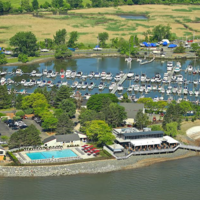 78 Reviews
At the widest part of the distinguished Hudson, 60 tree-lined acres create a ... Read More

Completed in 1959, the Saint Lawrence Seaway was a joint project between Canada and the United States to open up the Great Lakes to a major, full-scale shipping industry (the Seaway was open to the Atlantic already, but had many obstacles and smaller, inadequate canals that prevented major tankers and freighters from passing). Today, there are seven major locks and a deep, wide channel all the way from Cape Vincent on Lake Ontario to Quebec City - a 600 mile journey.

Farther on up the Saint Lawrence Seaway from Cape Vincent you can join the Richlieu River at Sorel north of Montreal, and then work your way down to the Hudson River, and eventually, the Atlantic Ocean at New York City. At Waterford on the Hudson River, you can take the Erie Canal over to Lake Erie. This route is often called the Triangle Loop cruise, signifying the triangular path from Waterford to Erie and on to Sorel.

For point of reference, the image above is the entrance into the Saint Lawrence River at the United States city of Cape Vincent. There is also an entrance into the river on the other side of Wolf Island adjacent to the Canadian city of Kingston. Rich with strong currents, the Saint Lawrence Seaway drops almost 250 feet on its journey to the Atlantic Ocean about 600 miles from Cape Vincent. This is the Thousand Islands area of the seaway.

Entering from Lake Ontarion, red and white Morse buoy (A) marks the opening of the river between Wolf Island and Tibbetts Point. From here, you need only follow the well marked channel up into the seaway. There are seven locks to navigate on the downstream trip to the Atlantic.

The small island in the image above is Hinckley Point, and just across the river to the right is the town of Cape Vincent.

Write a Review
No reviews yet! Be the first to write a review of Saint Lawrence River Inlet.