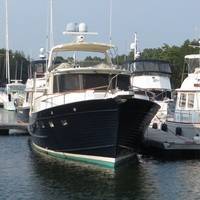 Matinicus Island is a remote, rugged outpost located about 15 miles south of Vinalhaven Island out in the Atlantic Ocean. The island is famous for its native population of Atlantic Puffins, a native shorebird with colorful beaks.

The light itself stands some 90 feet above the rough and tumble surface of the Atlantic Ocean, and casts a flashing white light every 10 seconds into the darkness. During fog, a horn can be heard every 15 seconds.

Two beautiful granite lighthouses were constructed here in 1857, 30 years after the original light station was established, but only the south light remains in service. The north light was discontinued in 1924, and the United States Coast Guard automated the south light in 1983.

The only buildings still standing on the island beside the lighthouses are a 160-year-old keepers house and a 116-year-old oil house.

Matinicus Island is a bird sanctuary, and while it is possible to land on the island, it is not recommended. Most people who go to the island are bird watchers hoping to see the native puffins and normally arrange a tour from a shoreside facility. The lighthouse itself is not open to the public.

Write a Review
No reviews yet! Be the first to write a review of Matinicus Island LIghthouse.