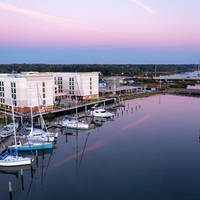 8 Reviews
Hidden Harbor Marina is ideally located at the northern end of the Sebastian ... Read More 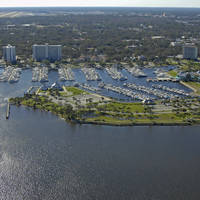 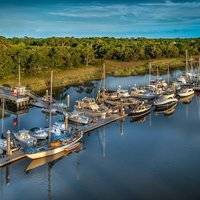 The San Sebastian River is reached from the Matanzas River and Intracoastal Waterway at ICW Mile 780. While the San Sebastian River poses little in the way of navigational hazards, the current can run strong here on both tides; a careful watch on your position in the channel is required. That said, the river is dredged and has a controlling depth of eight feet up to the Kings Street Bridge, which is the head of navigation for the river.

From the Intracoastal Waterway at Mile 780, pick up green daybeacon 1 and red daybeacon 2 (both visible in the image above), which both mark the entrance to the San Sebastian River. Once you have cleared the entry marks, you can head upstream through the well-marked channel, and then make a sharp turn to starboard (north) at green daybeacon 9.

The image above is a view from the east looking west over the entrance to the San Sebastian with the rivers entrance marks and channel clearly visible along its length. The San Sebastian River is home to the majority of the marina facilities for the area with more than six facilities lining its shores.

Write a Review
No reviews yet! Be the first to write a review of San Sebastian River Inlet.