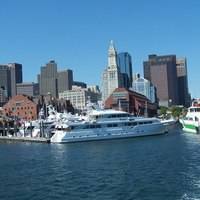 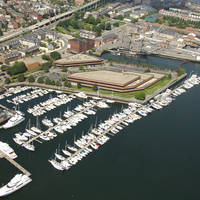 Boston is a diverse area, both in boating terms and as a city. Boating areas in Boston are literally spread all over the map. To the north is Winthrop, Snake Island and Belle Isle. Dorchester Bay is to the south and has four marinas near Pleasure Bay and several more south past Columbia Point into the Neponsett River. Also to the south is the Weymouth Fore River where about 16 marinas can be found. As with any large boating area, dont just show up at your destination and assume that they will have space available. Always call ahead and make reservations.

The image above is a view from the east looking west over the entrance to Boston at President Roads, which is the main channel into Boston-proper. The small tip of land off to the left-hand (south) side of the image is the northern end of Long Island (some times referred to as Long Island Head), while the southern tip of Deer Island can be seen off to the right. Farther off in the upper-right-hand portion of the image is Bostons Logan International Airport. Farther still is Downtown Boston, which can be identified by the tall buildings on the horizon.

Boston originally developed as a center for Puritan life and eventually became known as the birthplace of the American Revolution because of the Boston Tea Party, an event that led to further aggressions between the Colonies and Great Britain.

Although the approach to Boston begins many miles offshore, we will discuss the primary entrance through the North Channel, which starts just northeast of Deer Island. Approaching from the Atlantic, first pick up red and white Morse (A) buoy NC, which is located near waypoint N42 22.530 W70 54.297. Once you have successfully navigated to Morse (A) NC, set a course of about 248 degrees magnetic for .8 mile to intercept flashing green buoy 1A and flashing red buoy 2.

Various other area sof Boston are discussed in detail throughout our Massachusetts Harbor inlet coverage. These include Dorchester Bay, Weymouth Fore River, Neponsett River and Town River Bay. Marina facilities, navigation suggestions and Local Notices to Mariners are included with each informational page.

Write a Review
No reviews yet! Be the first to write a review of Boston Harbor Inlet.