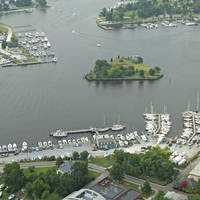 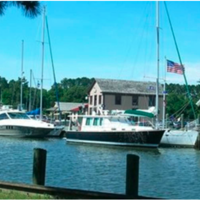 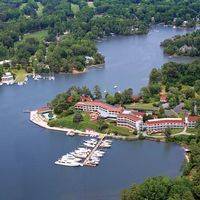 18 Reviews
The Tides Inn Chesapeake Bay Marina provides the beauty and tranquility of a ... Read More

From the Chesapeake Bay, pick up flashing green 1, which is right on the centerline of the channel between the two large breakwaters. Flashing red 2 marks the southern edge of the channel. Once inside, a series of daybeacons and lighted marks trace the path of the twisty channel toward Ewell. The reported depths of the channel range from five to seven feet, but a slow and cautious approach is warranted as shoaling can occur at any time.

The entrance markers are clearly visible in the image above.

Smith Island is a unique inhabited marsh island located in the southern Chesapeake Bay off of the city of Crisfield about 70 miles from Annapolis. What makes Smith Island interesting is not only that it is only reachable by ferry or boat, but also that several generations of families have lived on the island, making their living by harvesting the local waters for crabs, oysters and fish.

Smith Island is one of the largest soft crab producers in the country. The expansive grass flats around the island make perfect protective habitat for vulnerable blue crabs to shed their shells, and the waterman of the island use scrapes to harvest them from the bay floor. Soft crabs from Smith Island are often served the next day in New York City restaurants.

Smith Island is a great place to visit, but facilities are limited for the cruising boater, as workboats take up most of the precious dockage here. We recommend putting into Crisfield to the east and taking one of the daily ferries into Smith Island instead.

Write a Review
No reviews yet! Be the first to write a review of Big Thorofare Inlet.