Partly cloudy throughout the day.
83℉SSW at 4 knots 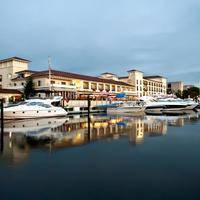 16 Reviews
Chief among the many inspired features of DELAMAR Greenwich Harbor is our fro... Read More 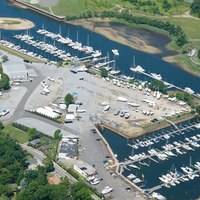 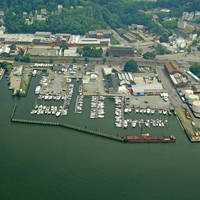 1 Review
Westerly Marina was founded on the Ossining Waterfront in 1959 by Arthur DeMa... Read More

Stamford, a historic industrial center, is located off Long Island Sound about five miles east of Greenwich and nine miles southwest of Norwalk. Well protected and easy to enter, Stamford is a popular stopover for many New England boaters and transient visitors. Inside the harbor and up its two branches are a good variety of marinas and marine facilities, a few of which will make space available for transient guests.

Stamford Harbor is best approached from the south via Long Island Sound. If you are approaching form the east, be aware that you must steer clear of the ledges and rocks at The Cows south of Shippan Point before making your turn north toward the harbor.

Green gong buoy 1 and red nun 2 (red nun 2 is visible in the image above) mark two rock ledges on the west and east side of the entrance channel, respectively. From here, set a course for the opening to Stamford Harbor at green light 3 and flashing red 4, which mark the west and east harbor breakwaters.

Once inside the harbor, a straight line of nun and can buoys lead up to the harbor split at Cemetery Point where the East and West branches break off from Stamford Harbor. The outside of Stamford Harbor before the split is characterized by several anchorages and a mooring field that is situated in the northeast portion of the harbor behind Rhode Island Rocks (visible above).

Both branches of the harbor above Cemetery Point have good marina facilities, and there is at least one facility in each branch that accepts transient guests at its slips. Stamford is mainly an industrial city, but there are ample supplies and provisioning possibilities ashore for those who need to restock their stores.

Write a Review
No reviews yet! Be the first to write a review of Stamford Harbor Inlet.