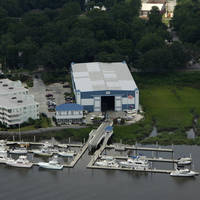 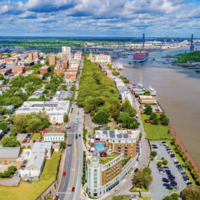 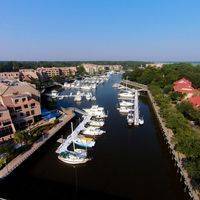 St. Catherines Sound is located on Georgias Atlantic Coast between St. Catherines and Ossabaw islands about 28 miles south of Savannah and 40 miles northwest of Brunswick. If you are traveling south along the Intracoastal Waterway, be sure to fuel up in Thunderbolt, just south of Savannah, as fuel is scarce until you reach Brunswick near Jekyll Island. Likewise, if you are northbound, fuel up in Brunswick or Jekyll Island if you are headed north.

The image above is a view from the east looking west over St. Catherines Sound. Off to the right (north) is Ossabaw Island and the Bear River. To the left (south) is the northern tip of St. Catherines Island and the North Newport River. The Intracoastal Waterway crosses the sound around its north end, and then turns toward the west, eventually running south into the North Newport River near ICW Mile 620.

St. Catherines Sound is reached from the east via a passage from the Atlantic Ocean. From the Atlantic Ocean, set a course near waypoint N31 40.197 W81 00.187 to pick up red and white Morse (A) buoy STC. Once you have safely navigated to red and white Morse (a) buoy STC, set an approximate course of 282 degrees magnetic for about 3.4 miles to intercept green nun buoy 3 and quick flashing red buoy 4.

Next, set a course to the northwest toward green nun buoy 5 just a small distance north, and then head northwest and pick up flashing green buoy 7. Next in line is green nun buoy 9, where you will set a course toward quick flashing red 114 at the east and of Medway Spit, and extensive shoal area. It is tempting to cut this mark short from green nun buoy 9 and head directly for flashing red 114A, but there are shoals working north from St. Catherines Island that, while charted at seven to nine feet, are potentially problematic.

As previously mentioned, marinas and facilities of any type are scarce here. make sure you are well fuels and properly provisioned before taking on this long stretch of water.

Write a Review
No reviews yet! Be the first to write a review of St. Catherines Sound Inlet.