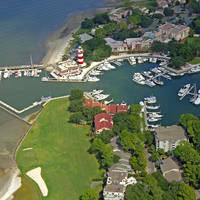 60 Reviews
For more than 40 years, the red and white striped Harbour Town Lighthouse has... Read More 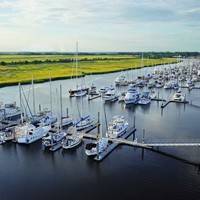 The lighthouse was originally equipped with 14 lamps each with a 14-inch (360 mm) reflector. The reflector size was increased to 15 (460 mm) inches by 1848. This arrangement was replaced by a third-order Fresnel lens in 1903, which is still used in the lighthouse.

The original tower, moved from Little Cumberland Island, was 50 foot (15 m) tall, placed on a hill. In 1881 a lantern was installed on the tower, increasing the tower height to 64 feet (20 m), with the focal plane of the light 107 feet (33 m) above see level. The next-to-last civilian keeper of the Amelia Island lighthouse was Thomas J. O'Hagan, who was the son of the previous keeper, Thomas P. O'Hagan, and was married to a direct descendant of the first keeper, Amos Latham.

The lighthouse was transferred from the United States Coast Guard to the City of Fernandina Beach in 2001.

It is listed as number 565 in USCG light lists.

Write a Review
No reviews yet! Be the first to write a review of Amelia Island Lighthouse.