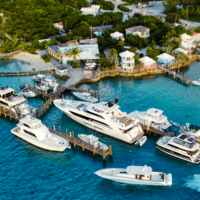 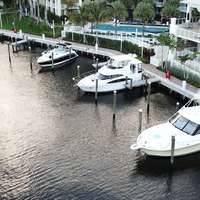 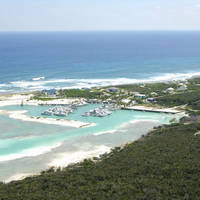 The image above is a view from the south looking over the entrance between Russell and Charles islands. Directly beyond the entrance is the Spanish Wells Resort and Marina.

You can approach the area from the south around an approach from Meeks Patch at waypoint 25 31.473N 76 46.994W. Once you have picked up the waypoint, head about two miles on a course of 65 degrees true to pick up the south entrance into Spanish Wells. Two buoys mark the edges of the channel between Russell and Charles islands, where you will find a passage withe eight-foot depths.

If you are unsure of any route in the are, it is suggested that you hire a pilot to help you weave your way in. A simple call on VHF Channel 16 (available pilot will do) will allow you to arrange for guidance through the channels.

Spanish Wells has one primary marina, which is located about one mile in from the beginning of the eastern entrance channel on the north side of the harbor. Moorings are available just to the northeast of Charles Island. Hail Cinnabar on VHF Channel 16 for details. Anchorage is available outside of Spanish Wells south of Gun Point, but Spanish Wells harbor is too narrow to drop the hook safely.

Write a Review
No reviews yet! Be the first to write a review of Spanish Wells South Harbor Inlet.