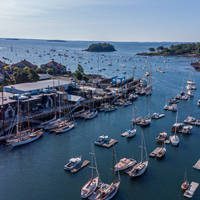 Rockland Harbor is a major boating center that is located on the west side of Penobscot Bay in Knox County. Geographically speaking, Rockland Harbor is 10 miles west of Vinalhaven and 45 miles southwest of Mount Desert Island.

Rockland Harbor is reached via an approach from the east from Penobscot Bay. If you are approaching at night or in fog, the Owls Head Light House stands 90 feet above its namesake geographical feature with a flashing white light and horn signal during forg or reduced visibility.

First, set a course from Penobscot Bay to intercept red and white Morse (A) buoy PB, which is locate at an approximate waypoint of N44 05.89 W069 00.20. Once you have safely navigated to red and white Morse (A) buoy PB, set an approximate course of 292 degrees magnetic for about 3.7 miles to pick up the Rockland Breakwater Lighthouse on the southern end of the breakwater itself.

From here, set a new course of about 284 degrees magnetic for nearly .8 mile to intercept flashing red 2, and the beginning of the surrounding dredges channels that run along the Rockland waterfront.

Write a Review
No reviews yet! Be the first to write a review of Rockland Harbor Inlet.