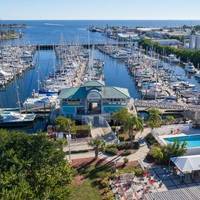 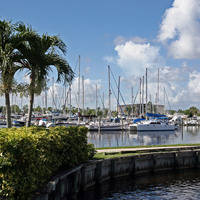 Located in the northern portion of Hillsborough Bay near the Garrison Channel, the Seddon Channel is one of may branches of water that split in and around the Davis and Harbour Islands area about five miles southeast of the Tampa International Airport and 30 miles northeast of the Tampa Bay Inlet at the Gulf of Mexico and Gulf Intracoastal Waterway.

Now the center of a large building and development boom, the Seddon and Garrison channels area was once a commercial port and shipping area, but more recently that has given way to the construction of hotels, marine basins and waterfront shopping developments.

There are a variety of marinas and accommodations in the Seddon Channel/Davis Islands area. Approaching from the south via the Cut C Channel, the Davis Islands Yacht Club is visible in the protected harbor next to the Peter Knight Municipal Airport. The marina has transient slips, a restaurant on-site, a pool, and showers/restrooms. The Marjorie Park Yacht Basin is located off the Seddon Channel on the east side of Davis Islands in a protected basin, and is visible on the left (west) side of the channel in the image above.

To reach the Seddon Channel area, you must first navigate up the eastern branch of the Tampa Bay Channel past a number of commercial ports, channels and approaches. This area is busy with all manner of ship traffic, from enormous cruise liners to small commercial barges in tow. Transiting the are requires a sharp lookout for large traffic that has difficulty maneuvering (i.e. cannot avoid you in the event of an imminent collision).

The Cut C Range runs north for about six miles until it reaches the Cut D Channel at flashing green buoy 31. Once you have intercepted the flashing green buoy, you can continue to port (the starboard passage leads up the Port Sutton and East Bay channels), picking up red nun buoy 32, and then flashing green 35 following the Cut D range farther to the northwest. Harbor Island marks the split at the Sparkman and Seddon channels, with Seddon Channel running to port (left in the image above).

Write a Review
No reviews yet! Be the first to write a review of Seddon Channel South Inlet.