Partly cloudy throughout the day.
66℉S at 5 knots

100 Reviews
Kennebunkport is a destination worthy of its own special trip and for 54 year... Read More 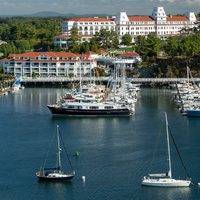 Safe Harbor Wentworth By The Sea

89 Reviews
Safe Harbor Wentworth by the Sea, the ultimate in comfort and service, is nes... Read More

Portland Head Lighthouse is the gateway to the city of Portland, Maine, an important commercial and recreational boating port. Located just north of Cape Elizabeth, the directional light is not part of the light in the tower, but rather is located near ground level on the east side of the fog signal building. The light flashes a white signal every four seconds, and a horn signal can be heard every 15 seconds during periods of fog. There is also a directional portion to the light with green, white and red sectors on the east approach to Portland Head.

The lighthouse was established here and construction was completed in 1791. In 1989, the United States Coast Guard automated the light.

Navigating in and around Casco Bay toward Portland is fairly easy if you follow all the aids to navigation carefully. Once Past Portland Head on the approach to Portland, follow the shipping channel marker in past Spring Point, and then into Portland harbor, which will be to port.

Although the light tower itself is not open for public tours, the grounds are, and the old light keepers house is a museum. Complimentary parking is available at the lighthouse.
The hours for the museum are from 10 a.m. to 4 p.m., Saturdays and Sundays only, starting April 22, and then daily, 10 p.m. to 4 p.m. from Memorial Day forward.

Write a Review
No reviews yet! Be the first to write a review of Portland Head Lighthouse.