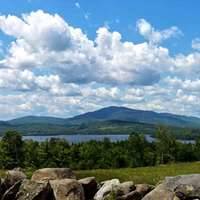 2 Reviews
Dockside Inn and Tavern is located on the edge of pristine Moosehead Lake in ... Read More

Fort Point Lighthouse stands 88 feet above the entrance to the Penobscot River on Fort Point about six miles north of he town of Castine, Maine. The light has a fixed (not flashing) white light and a fog signal that sounds a blast every 10 seconds during foggy periods.

Constructed of brick, the white and black lighthouse is skirted by a white and red light keepers house, fog bell tower, garage, oil house and barn. The original fourth order Fresnel lens is still in service.

The original light station light station was established here in 1836, and the lighthouse was constructed in 1857. The United States Coast Guard automated the light in 1988.

Fort Point marks the beginning of the approach to the mouth of the Penobscot River on its east shore. Be sure to honor the fixed red flashing light at Fort Point Ledge, just south of the lighthouse, as depths shallow quickly and a rock outcropping is bare at all times

The grounds are open and accessible to the public, although the lighthouse itself can only be viewed with prior arrangements. The entire property is part of the Fort Point Historic Site.

Write a Review
No reviews yet! Be the first to write a review of Fort Point Lighthouse.