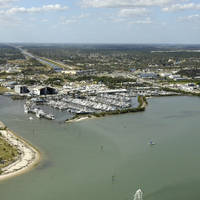 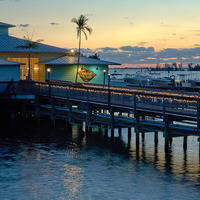 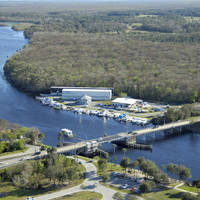 If approaching from the west, you will already have cleared the 21-foot closed vertical clearance McCauliffe Bascule Bridge, which opens on request. Approaching from the east, keep in mind that the sliver of water from the west end of Port Canaveral to the east entrance of the Canaveral Barge Canal is technically called the Saturn Barge Canal, but people often refer to the entire length of the channel from Port Canaveral to the Indian River on the west side of Merritt Island as the Canaveral Barge Canal.

From Port Canaveral, head east across the Banana River toward the canal entrance, making sure not to pass north of the marked channel into the security zone. Along the way, make sure to honor flashing green 5, green daybeacon 7, and then flashing red 8. From this point all the way west to the Indian River, you should be able to count on 11-foot-depths.

The most important thing to consider when navigating east or west into our out of the east entrance to the Canaveral Barge Canal is that the area north of the channel is restricted (NASA) and those who enter the security zone will receive a swift, and probably not-so- pleasant response.

Write a Review
No reviews yet! Be the first to write a review of Canaveral Barge Canal East Inlet.