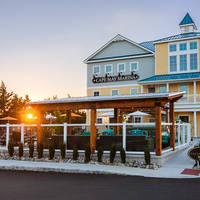 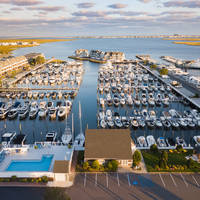 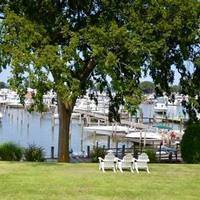 The Chesapeake and Delaware Canal (C&D Canal) is a 14-mile-long, 450-foot-wide, and 35-foot-deep ship canal that cuts across the states of Maryland and Delaware, in the United States. It connects the Delaware River with the Chesapeake Bay and the Port of Baltimore. The C&D Canal is owned and operated by the U.S. Army Corps of Engineers, Philadelphia District. The project office in historic Chesapeake City, Maryland, is also the site of the C&D Canal Museum and Bethel Bridge Lighthouse.

The image above is a view from the east looking west over the inlet jetties that funnel into the east entrance of the C&D Canal near Delaware City, (barely visible in the top right-hand portion of the image). Reedy Point is located to the right (north), while the Reedy Point Bridge (136-foot fixed vertical clearance) can be seen at the top of the image. This is the first of seven bridges you will negotiate on your way west to Chesapeake City and the Chesapeake Bay.

In the mid-1600s Augustine Herman, a Dutch envoy and mapmaker, observed that two great bodies of water, the Delaware River and Chesapeake Bay, were separated only by a narrow strip of land. Herman proposed that a waterway be built to connect the two. The canal would reduce, by nearly 300 miles, the water routes between Philadelphia and Baltimore.

The issue of constructing the waterway was raised again in 1788 by regional business leaders, including noted Philadelphians Benjamin Franklin and Benjamin Rush. In 1804 construction of the canal began including 14 locks to connect the Christina River in Delaware with the Elk River at Welch Point, Md. But the project was halted two years later for lack of funds.

In 1954 Congress authorized further expansion of the channel to 450 feet wide and 35 feet deep. These improvements began in the 1960s and were completed in the mid-1970s.

The eastern end of the C&D Canal meets the Delaware River at Reedy Point just south of Delaware City, and is located about 40 miles south of Philadelphia. The C&D Canal is a major commercial thorofare. In fact, it is a rare occasion that a C&D passage is made without seeing a large commercial vessel plying the canal waters. For this reason, a vigilant watch is required, and safe distances must be kept from all large commercial ships, tugs and barges.

The tide on the C&D Canal is of particular importance. There is a four-foot tidal difference at Reedy Point, and currents can run as high as two knots so we advise traveling on a favorable current. The flood tide runs easterly on the C&D and the ebb sets to the west. Consult a reliable tide chart before you plan your trip.

Quick flashing red 2 and quick flashing green 1CD mark the north and south breakwaters, respectively. Once inside, it is only a matter of staying mid-channel and clearing the bridges. The one opening bridge on the canal, the Conrail Lift Bridge (45-foot closed vertical clearance, 138 feet up) is typically left open unless rail traffic is present. All the other bridges on the canal are fixed high vertical clearance spans. NOAA Chart 12277 has a handy bridge clearance tabulation near Note D.

The first marina you will encounter eastbound is the Summit North marina, which is located 8.6 miles east of the Reedy Point entrance just past the Conrail Lift Bridge. Remember, anchoring is mot permitted in the C&D Canal itself.

Write a Review
No reviews yet! Be the first to write a review of C&D Canal East Inlet.