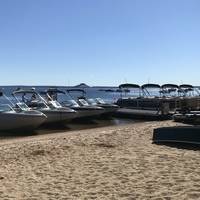 1 Review
Long Beach Marina is a quaint, family-owned marina that has been on Sebago La... Read More

Ram Island Ledge Lighthouse stands 77 feet above a rocky area east of Cushing Island on the approach to Portland Harbor. Portland Head light stands close by, about a nautical mile away to the southeast.

The granite lighthouse has a white light that flashes every six seconds into the surrounding waters and a horn that signals every 10 seconds, helping to guide in both commercial and recreational traffic to Portland harbor to the north.

Construction of the lighthouse was finished here in 1905 and the light was manned until 1959 when the United States Coast Guard automated the light.

You will find Rams Island Ledge on the east-northeast approach to Portland off of Casco Bay. The ledge is more of an island than a ledge, as the rocks are awash at all times.

As you travel farther into Portland Harbor, keep an eye out for the flashing red buoy marking the south end of Cushing Island and Catfish Rock. The rest of the approach to Portland is easy and well marked.

The lighthouse is off limits to the public and landing on the island is extremely dangerous. The best and safest views of the island can be had from the nearby Portland Head lighthouse, or well offshore from the island via boat.

Write a Review
No reviews yet! Be the first to write a review of Ram Island Ledge Lighthouse.